Yoga changed my Life and it's just too good a thing to keep to myself! I have been practicing yoga since 1995 and am a certified yoga instructor. I teach a combination of classical Hatha, Ashtanga and Vinyasa Flow. My teaching style is safe, compassionate and challenging at the same time. I teach at a number of studios, and also offer private and group lessons!

In addition to my schedule, I post other writings here, about yoga and Life in general. For private or group lessons, contact me at: workofheartyoga@gmail.com .

The first time I fell in love with cold soup was in Barcelona on my honeymoon. I had overdosed on paella the night before, and it was so frickin' hot outside, I could feel my skin cells dying one by one under the sun's rays, which I was pretty sure were aimed directly at me. My husband, also of the fair skinned variety, and I joked that we should have bought stock in a sunscreen company before we left.

It was almost 2pm and siesta was about to begin, so we were scrambling to get a meal and quick. But, the idea of digging into a steaming pile of rice and seafood felt daunting and downright undesirable. That's when our waiter, totally bored and unamused by my difficulty acclimating, suggested gazpacho rather cavalierly.

When the waiter brought it to our table, I thought, "Crap. Now I have to eat tomato soup?! What didn't he understand about me wanting something that wasn't hot? Is my Spanish that bad?"

Our waiter was, unfortunately within ear-shot, and retorted, "es picante, no caliente..."

"It's hot, but it's not hot?! Great, now a riddle." I was becoming seriously unhappy with the service and felt like I was Alice in Wonderland, desperate to find that damn rabbit hole again. More likely, it was the Sangria I drank on an empty stomach.

"No, April. He means 'spicy,' 'picante' means spicy." My husband translated. I was horrified that I was forgetting my Spanish, but as I brought my spoon to my lips, all the earth dropped away from me, and I was twirling in the air, floating on the vibrant flavor of crisp tomatoes and cucumbers and shocked back to life by the sassy jalapeño and red pepper. That soup literally kicked my ass, but in a good way.

I had it every day in the middle of the day for the rest of our trip.

Gazpacho has had an important influence on my life; it reminds me to shake things up a little bit, especially when it gets hot. It's so easy to make, but has such a complex flavor. And it's just so darn good for you. I dare you to make something this low fat that isn't water...

Considering summer is here, and it's heating up out there, I thought I would share it with you. Also, a few friends, Rachel, Jennifer and Joel, recently gave this recipe a thumbs-up. And I'll dedicate this one to my husband, who always inspires me and adventures with me to try new things.

Take out your blender. Dump the whole can of tomatoes in (you can strain it first for seeds, etc, but I figure why bother?). Toss in the jalapeño, onion, cucumber, garlic and white vinegar. Put the lid on and blend away, shaking the blender every once in a while. Then, with the blender on, remove the lid, and start to slowly drizzle in the olive oil. Taste. Then add salt, pepper and Tabasco to your taste, blending each time you add any. Chill in the fridge for an hour - or be really smart, and get all the veggies really cold before you chop them up!

To get fancy - chop finely a bit of extra onions and jalapeño, maybe some parsley, and garnish the soup with a little in the middle of each bowl on top. You can also toss in croutons, or do my favorite, and serve the soup with warm crusty bread and a little bit of Brie cheese.

Enjoy! And come do yoga...you can eat Gazpacho after... 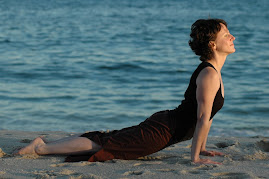 MY LINKS:
GODA Yoga
Prenatal Yoga video clips by me

To Get Automatic Email Updates: 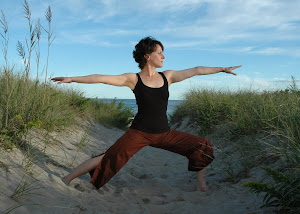